A Quiet Thanksgiving Until...

With gatherings limited this year we were planning a quiet day of giving thanks at home. The plan was to try to make this holiday special for the kids since they couldn't gather with all the cousins and such. After a nice breakfast and a few quick farm chores, we watched the Macys Thanksgiving Day Parade. Lots of Quality time, all was going according to plan. Shortly after noon we received a call from my in-laws. Julie's dad, Melton, has recently gotten interested in raising cattle. He fenced in some property and I've been helping him select cattle. I've also become the de facto consultant, which is a role I'm happy to have. In fact I'm quite enjoying it. There's always something different or unexpected that comes up. On Thanksgiving afternoon though, we faced the most interesting situation yet. It turns out there was a hidden hole in the pasture. We're not sure if it was an old cistern, or a limestone sink. Whatever it was, its not something you want in your pasture. Melton noticed one of his cows bellowing uncharacteristically often. As he evaluated her, he noticed she kept going back to the same location. That location is where he found the hole. Inside the hole is were he found that cows calf. Despite only having an 18 inch opening, the cavity below was about 7 feet deep and 6-8 foot across. The 400 pound calf was standing comfortably, but was surely confused and wanted out of its current situation. After I got the phone call explaining the circumstance, I asked the kids if they wanted to go on a thanksgiving day animal rescue adventure. Of course they did. I loaded up the skid steer and Julie got the kids dressed for playing in the pasture. The rescue was tricky. The soil over the calf was rather thin and questionable, so we couldn't just dig straight down. I decided to dig a trench toward the hole. I needed the trench to be just deep enough that the calf could climb out when we reached the hole. About 4 feet deep did the trick. I basically built a ramp from the hole up to the surface. As I reached the hole we decided to do some hand digging so we wouldn't cause the top of the hole to cave in on the calf. The hand digging was slower, but we could soon see the calf. I pushed quite a bit of dirt in by hand to build a sort of ramp for the calf. Lots of roots were covering the opening, making the calf not want to come through. I lifted the roots out of the calf's line of sight, while the kids tried to encourage the calf to exit. Finally she did. Mother and Calf reunited quickly and the calf was hungry for some milk. She nursed the mother for 20 minutes straight. That was pretty much just what we needed for this Thanksgiving, a family adventure with a happy ending. I proceeded to fill the hole so we don't repeat that situation with a potentially worse outcome. I hope you all had a happy and eventful Thanksgiving. 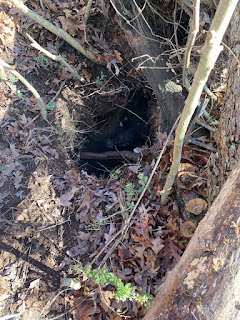 Posted by Carlton Farms at 8:26 AM