The Woes of the Lactation Curve

I did make a video explaining the lactation curve a few years ago, but today I mercifully spared you the boredom. If you're interested it is still floating around YouTube. Today I want to briefly try to explain why milk is already sold out for the week, even though it is only Monday.
Basically, it's because many of our cows have managed to get themselves on a similar reproductive cycle. The chart below shows milk production over the course of a normal lactation. Peaking at about 6 weeks after calving, and fading over the next 8 months. If you only had one cow you would have plenty of milk early, then be short of milk when she neared the latter stages of her lactation. Compounding the problem, dairy cows require an 8-10 week dry period before the cycle can start over. So in the scenario with only one cow, at the end of this lactation, you would then have no milk for 2 months. If you add more cows to this equation and spread their calving throughout the year, you can start to even out your production. That is how we normally have enough milk year-round. However, as I mentioned earlier, several of our cows are on a similar reproductive cycle. When this happens, it's almost like having only one cow. Production of all those synchronized cows peaks together, and declines together. Right now our Dry-cow pasture is full of cows that will be having babies in the coming weeks. That's the good news. The bad news is that milk production will be limited to the non-synchronized members of the herd until those calves start arriving. I know that is not much of a condolence when you just want to order some milk, but I did want to try to explain what was going on behind the scenes. Eating local and farm fresh is better in every way, but it is sometimes more sporadic in nature. But then again, life on the farm is rhythmic. We learn to appreciate the ebb and flow of production cycles. The alternative is an industrialized product that is almost always available, but never as good. 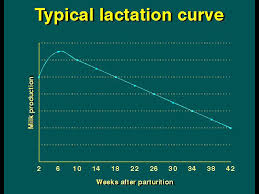 Posted by Carlton Farms at 6:31 AM