This will be a multiple part blog post because I have a lot to say about this man right here. His name is Steve. Affectionately referred to as Uncle Steve by my kids and their cousins, and "My other son" by my dad. Steve has been a part of this farm since he was a young boy. His Uncle milked cows for my granddad, and his brother has helped on the farm occasionally. Steve though, has always been a fixture around here. Some of my earliest memories of the farm include Steve. From what I can gather he started hanging out around here when he was about 10-12 years old. I hear stories of him crawling under silage wagons as a boy to figure out how they work. My dad says they would have to check under all of the equipment before they got on to drive out of the field, just to make sure he wasn't studying the under-side of it. Unfortunately, Steve had plenty of time to hang out around the farm. Common to many kids "like him", the education system of the 1960's failed him. This was before my time, so again, from what I can gather Steve only formally received a 2nd grade education. This will be a story about the education he received on the farm, and the education we received from him. It will be a story about a man that I grew up with, a man that I consider a friend, and honestly a part of this family. It's about the ups and downs of a man that started off in this world with a steeper climb than almost all of us reading this. It'll be about those challenges, the successes, the funny stories, and the nuggets of wisdom. Ultimately, it'll be about a life, despite many challenges, that has been pretty well lived. Everyone say hello to Steve. 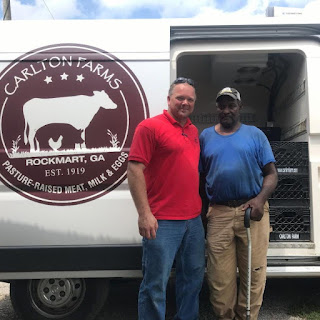 Posted by Carlton Farms at 8:04 AM