The Ides of March

At around 9:30 or so an EF-3 tornado touched down in our newly purchased carport. Our totally destroyed home was literally the very first sign of damage on a line of destruction that stretched for several miles, and accounted for two nearby deaths. Thankfully we were not in the house at the time of the tornado, but our life got turned upside down in an instant. We never wanted to build a new house, but were suddenly faced with that proposition. We had already ordered 2000 chickens and really needed them producing egg so the farm could start to generate revenue. The cleanup in front of us was a giant amount of unexpected work with 18 - sixty to eighty year old trees blown down, and a brick house to finish tearing down and haul away. As I think back on it, the 2 years following the tornado are a complete blur in my memory. There was more to do each day than I could even begin to complete, or even make a noticeable dent in. It was overwhelming at times.

Today looking back on that memory I can't help but think of the new house that sits in the same location, and how it has become a home for us. I think about how this farm has grown and prospered over the last 12 years. I think about how Julie and I have grown closer together through it all. And I think about how blessed we are to watch our 3 kids that occupy these bedrooms and run around this farm the way we dreamed they would.

I don't say this to pat ourselves on the back. We do plenty wrong. we just try to work hard and do the best we can.

This writing is a hat-tip to the resiliency of the human spirit. During that time I watched all of our neighbors pick-up the pieces and rebuild their lives. I watched strangers spend their time helping fellow humans clean-up the damages. I watched people work together to rebuild a community. Nobody wanted accolades, everyone just felt a innate desire to help each other. That time is when I saw the resiliency and adaptability of the human spirit. When faced with seemingly insurmountable odds, humans tend to rise up and ultimately prevail. Our community did in 2008, as many others have in recent years and across the long span of history. I don't know what could destroy or cripple the human race, but I don't think it's COVID-19. We will do whats necessary to prevail, and we will get through this together.

Long live the resiliency of the human spirit. 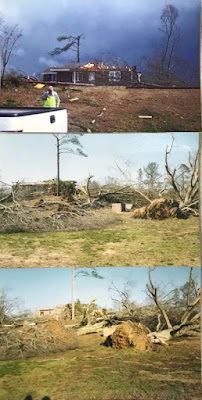 Posted by Carlton Farms at 6:49 AM