The Second Biggest Snowfall I Remember

At the risk of sounding like an old timer. That was nothing, Ya'll should have seen the blizzard of 1993.
I hope everyone had fun playing in what turned out to be a significant snowfall for us. Here at the farm we got approximately 8 inches, and very minimal disturbance in power. some places really close got 12 inches of snow and still have no power. Overall we made it out fairly unscathed. We had few tree branches down (one on a Muscadine trellis unfortunately), the cows ate a little more hay, and the chores were a little more challenging.
1993 on the other hand was a memory that is scared into my memory for life. It was March 13 and I was 16 years old. That year the snow fell overnight. I think we got 13-16 inches, but it was hard to tell because a lot of wind accompanied that snowfall. Some places had snowdrifts that were 4 feet deep. Where my bedroom was positioned in the house I could see our large old hay barn in the distance outside my window.  The first thing I noticed as the sun came up that morning was that my view had changed. In addition to the blinding white snow that blanked everything, our hay barn that dated back a few generations had collapsed under the weight of the snow. Little did I know, that was not our most immediate problem. We were milking well over 100 cows at that time. We had no power and no generator. Our farm is situated right on a main highway, and not to far from a power plant. Because of our location, we usually do not loose power, at least not for very long. But we had never seen weather like this. We soon learned that milking that many cows by hand was not happening. Keeping them fed was challenge enough. As any dairy farmer knows, you can't just not milk your cows. But in this situation, we had no choice. We had major concerns that we would have numerous cows with mastitis (inflammation of the udder).  As well as I can remember, we were out of power for about 3 days. I do remember very well that we were talking in the living room by lantern light at around 11 pm when the power came back on.  I don't think a word was spoken. Me, my dad, and my brother all got up from our seat and started getting dressed to go milk the cows. Taking care of those cows was not only our first thought, but our only thought in that moment. I think that was the first time I realized how different it was to be a dairy farmer. Our cows are heavily reliant on us, and we are heavily reliant on them as well. We live in this symbiotic dance between man and beast that is hard because of its relentless schedule, which is 365 days per year - No Excuses.
P.S. We did not have any mastitis issues in 1993, and I'm proud to say we did not loose any animals. 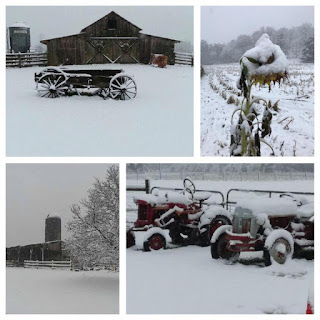 Posted by Carlton Farms at 5:52 AM