A Journey with Dad

The Early season hay harvest is finished. Getting all that hay put up caused us to be a little behind on planting corn, so we are trying to spend this next couple of weeks getting corn seed in the ground. After that, it'll be time to start harvesting hay from the warm-season grasses. Through it all, I've had a sidekick. In the picture, Atticus is sleeping on the floorboard of the tractor while I plow. (the hum of a pulling tractor is an easy sound to doze off to.) I remember tagging along with my dad on every farm adventure I could. I would beg him to get me up at 4 a.m. to "help" him milk. I would haul hay, and I would ride the tractor. We even have a similar picture of me asleep on the floor of the combine while my dad was harvesting beans. Now, this boy wants to be with me every step of the way, and it is so humbling. I can see my younger self in him, and I want to give him all the opportunities I had. I have never felt a more singular purpose than that of being a parent. All of life's other pursuits pale in comparison to the importance of this job. A few days ago I was in the van about to go pick up something. He ran to the passenger door, jumped in, and buckled his seatbelt. I've thought about his next sentence since that moment. Atticus said, "I don't know where we're going, but I'm going with you." Wow. He didn't care about the destination, or the tasks involved. He was only interested in the journey, and the company he would have on the journey. It made me think, How many times do I either just tolerate or completely ignore the journey because the destination is what I'm so focused on? Atticus knew intuitively that whatever the destination was, it would likely be temporary. The bulk of the time would be spent on the journey, and that's what he was most interested in. As adults, we have to focus on the destination. The destinations are the goals and achievements that we set for ourselves to live an accomplished life, and that's good. But our lives are not solely measured by the accomplishments. To a great deal, our lives are measured by relationships and memories. Those my friend, are created on the journey. 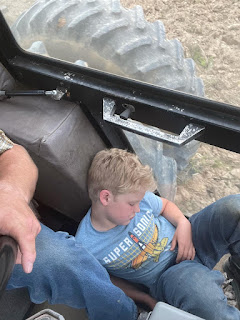 Posted by Carlton Farms at 8:45 AM