Unfortunately, this weekend I served again as a pall-bearer. This makes the third weekend in a row, and I'm ready for this streak to come to an end. I don't mind the task, actually, I find it an honor, but nobody likes to lose precious people that they have come to know through the years. This week's request came from a family that I know, but I'm admittedly not that close to. The gentleman that passed away was 97 years old. He had cattle and always grew a big garden. That's how our paths crossed. A few years ago he would come to me for some chicken manure for his garden. He had a law degree and passed the bar, but interestingly never practiced law. He liked the fact that our chicken manure was from free-range chickens fed non-GMO feed. I think he also felt a connection with me as a college-educated person that farms. Now, I don't normally get rid of our manure, we have plenty of crops that we can apply it on, but for some reason, I gave him some. For several years he would come back each spring for some of the "Black Gold". Each time we would have a 30-45 minute conversation, we would load up some manure for him, and he would shake my hand and drive away. I always enjoyed our encounters. Little did I know, those encounters meant a lot to him. His Daughter informed me that when they were planning his funeral arrangements a few years ago he had to think long and hard about the list of men he wanted to be pall-bearers. He wanted it to be a list of folks he deeply respected, and I made that list. At first, I was a little surprised, as our relationship was literally based on chicken manure. The more I thought about it though, his decision to include me in that list of highly respected men exemplifies the power of kindness. In 97 years this fellow met a lot of people, but he chose to put me on this list because I was kind to him. I listened attentively and engaged in the conversation, and I gave him some chicken manure, that's all. I don't write this to toot my own horn, quite the opposite. I wish I could say I was kind to everyone that crosses my path. That's probably not the case, but it should be. I'm always trying to be more kind. As he left this world, his request taught me a lesson about the power of that kindness, and I just wanted to share that lesson with you. Be kind. 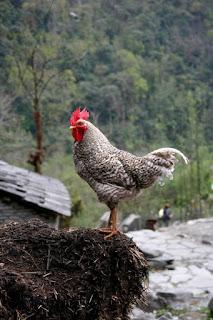