I have plenty to do out on the farm this morning. However, I can't help but notice how easy it is to stay inside for a bit longer when it's 20 degrees outside. Not to mention, the kids are home from school, so there's a "holiday" sort of feel in the house this morning. As I sat to write the "on the farm" section I reflected for a bit on why the kids are home. It's MLK day.

I don't get political much. That's not just on this platform. In general I just don't get political very much. Not that I don't have opinions. My political opinions just aren't radical enough to prompt a fist fight with... well anyone. I try to see and understand both sides of a debate thoroughly. This process usually leads me to a moderate take on most subjects. I've noticed that's not a popular tactic among political talking heads, or politicians for that matter. The most reasonable course of action usually lies somewhere in the middle. I believe most people, (not the loudest) feel this way. However, for some reason our politicians repel each other like oil and water. I just don't get it. Ultimately they should be there to work for the greater good of all citizens, not just work to get re-elected.

I'm no MLK scholar, but I think all of our politicians could use a good dose of the MLK reasoning in the quote above. We are all in this together. Each decision that effects one group directly, does indirectly effect others. As a country we must protect ourselves, promote ourselves, and grow. However, we must do so with integrity, love, empathy, and character. Is that asking to much?

Lets protect and thoughtfully enjoy all of the freedoms that this country offers, while also properly taking care of and loving those that need it. This is not an either or, we can do both.

While I'm at it. I have an idea that the founding fathers should have put in the constitution. I here a lot of folks talk about term limits. I think this is a better solution. No Consecutive terms. Serve as many terms as you want, but you must sit out a term in between serving. This should remove the motivation to make decisions just on the basis of getting re-elected, and would allow politicians to be more like the historic statesmen that once filled those roles. Make no mistake about it, in our current system a politicians primary goal IS... to be re-elected. 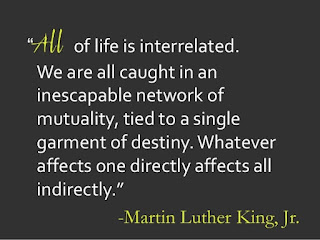 Posted by Carlton Farms at 9:00 AM