The Carlton Farms 100th anniversary barn dance was fantastic. There were times during the night that I was almost overcome with emotion. One...Hundred... Years... Wow. In those moments of heavy emotion I thought most about the sacrifices my Dad and Grandpa made throughout their life (not to discount the sacrifices also made by their wives, my mom, and grandmother) to keep this place intact, operating, and with their head just barely above water. They were and are strong, smart, selfless, humble and hardworking men. I grew up working side-by-side with them each and every day, and those are lessons that can't be bought. Being raised on that farm, in the shadow of those two men is what I consider the biggest advantage I've been given in this world. If either of them had taken their eye off the ball for a bit, or allowed the details to slip through the cracks, or simply been a little less stubborn, I would have missed that opportunity. It would have been easy for them to get a job in town making better money and working fewer hours, but they didn't. I know they pressed-on often when most of those around them were saying "it's not worth it". Ultimately, that is the only way to make it to 100 years of anything. You have to believe in it the most. Today we are blessed to have many people that appreciate and support what we do. It was such an honor to be surrounded by Family, Friends, and Customers that have become friends. We were all celebrating the perseverance, dedication, and probably stubbornness it takes to hold anything together for 100 years. There were very trying times before me, and even during my lifetime, there have been times we didn't think we would be able to have this celebration. I'm sure there will be trying times ahead. I pray that my brother and I have that right combination of stubbornness and character to hold this thing together for our share of the next 100 years. 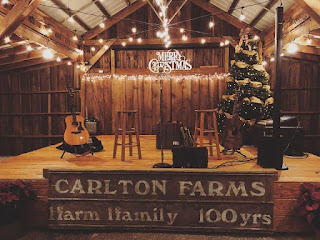 Posted by Carlton Farms at 7:15 AM