Well, it was a busy weekend on the farm processing turkeys. The personality of the farm itself changes when the turkeys are gone. The purring and putting sounds that we grow accustomed to during the late summer and through the fall are noticeable missing after the last Turkey is harvested. I'm not sure that anyone else notices this void, but I sure do. In my internal clock this signals the end of the busiest season, and the beginning of the dormant winter season. I take comfort knowing that everything on the farm is a intricate cycle. After a few cold months, I'll be ready to fill the pastures back up with free ranging turkeys and chickens.  Watching the dance take place between growing grass, grazing cattle, sheep, Turkeys, and chickens is one of my greatest pleasures. As a farm manager I get to coordinate this dance, which is sometimes a great challenge. We coordinate this dance by deciding who grazes where and for how long and then which species follows behind, and how do we protect the venerable, while allowing them the freedom to exhibit their natural behaviors. A lot of decisions go into this dance, one of which is how man of each species to incorporate. This is were I dropped the ball this year. I over produced turkeys last year, and this year I over corrected, resulting in not nearly enough turkeys to go around. I'll do better with the next cycle. 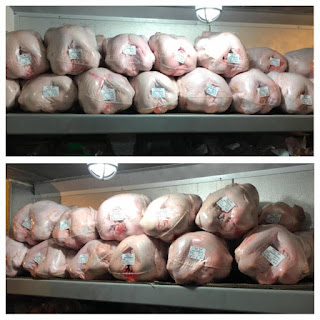 Posted by Carlton Farms at 6:24 AM