Its Not All Sunshine and Roses, Part 2

I'll warn you upfront, this is not a happy post. Unfortunately I do not have good news about Atticus Calf. Named Chevy by the way.  In case you missed last week's episode; Chevy came down with what presented as a neurological condition due to vitamin/mineral imbalance. Cause was determined to be, get this, grass that was too lush. The young and tender grass shoots hadn't yet pulled the minerals from the soil. Apparently Chevy was fond of those young and tender shoots and ate them exclusively. With the help of our local veterinarian , we had treated the underlying issues, and Chevy was making slow incremental progress. However, she was not eating or drinking on her own. I had tube fed her twice daily to keep her hydrated and to keep her energy level up.  She had gotten to where she could stand on her own, and keep her balance  while standing, a major improvement over where we started. On friday evening she couldn't stand on her own, and I didn't force her. It was late and I wanted her to be able to rest.  I did tube feed her the smoothey that we had developed for her, and I went home to see the family, after all is was 9:00 pm. At around 10:30 for some reason I got out of bed and decided to check on Chevy. As I walked to the barn I could hear a strange sound. It was Chevy, and the sound was very labored breathing. As soon as the beam on my flashlight landed on her I knew the dire situation that we were in. Chevy was bloated. Bloat happens when the stomach gets twisted in such a way that gas from the rumen (second stomach) can't escape the body. Bloat can be a rapidly fatal situation, and I knew we had literally seconds to relieve the gas pressure. I first tried to stand her up thinking being vertical would help the her to be able to naturally expel the gas.  I soon realized that wasn't gonna work, mainly because she didn't stand on her own and I can only hold a 350 lb calf for so long. Then I sprinted to a different barn to get the esophageal tube that I had been using to tube feed her,  thinking that it could work in reverse. By inserting the empty tube down her throat, the gas would have a passage to escape.  I ran back to her pen, inserted the tube, and the gas started to escape. Unfortunately, i was to late. Despite relieving some of the gas pressure, Chevy died right there as I held her head. I had done everything I knew to do, but she didn't make it.
I went right into my typical mode of second guessing myself when something like this happens.  What could I have done differently? Could I have prevented this? I should have acted faster.  I tend to carry this type of thing around with me for quite a while.  I only really want a few things from this life, but being a great farmer is one thing I want. When something like this happens it shakes my foundation and makes me question myself.  Hopefully, through that questioning, I learned something from Chevy. Some little nugget of experience that will help me take better care of some future animal.
Ultimately, I'll start to gain a little perspective. In time, I'll remember that at this moment we have around 300 head of cattle, 150 pigs, and 4000 chickens. While I would like nothing more than to have a 100% success rate with every animal, I know that's not possible.  I have several farming role models, and they all lose animals from time to time.  The loss hurts, it always hurts.  I think the key is to let the loss strengthen your resolve to get better, to be even more aware, and to be diligent on every detail.

Thanks for allowing me to share this unhappy story with you. Writing it has allowed me to get some closure, and I needed that. 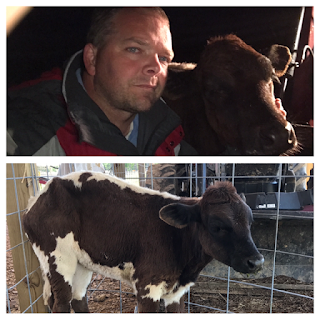 Posted by Carlton Farms at 2:45 PM