Basically a letter to myself

In addition to their responsibilities as a 4th grader and 7th grader, Atticus and Jersey have recently been pulling their weight in the egg washing room. The farm is a busy place and there is always a chore that needs to be done. It thrills me to see them pitch in, especially when they work well together (which isn't always...🤷🏼‍♂️). On this particular day (pictured) they washed and packed 175 dozen eggs in about 2 hours. I'm thankful for their ability and willingness to jump in and do some meaningful work. I remember the proud feeling I had when I first started to become "useful" around the farm. My dad was great about allowing me to be completely involved in whatever was going on. Some things I couldn't do, but many things I could. Most of the things I could do were at an age that some probably thought was too young. I distinctly remember standing on a bucket to milk cows and driving the tractor when I couldn't reach the pedals. The funny thing about being useful is that we also want to be recognized for our usefulness. Whenever I was out with my dad and we ran into another adult, they would say sarcastically "you got the good help with you today?" Followed by a chuckle. It would make me so mad. I felt like I was good help. I took that laugh and sarcastic tone as a complete insult. My dad never went along with that sarcastic talk, he just sort of ignored it and went on with his business. One day my little (approximately) 9-year-old self had had enough. I asked my dad if I was a good helper for him. He assured me that I was with a lot of affirmation. I said well if I am, why don't you tell these adults that laugh when they say "you got the good help with you today?" After a long hug and more affirmation, he agreed that he would defend me in those situations. And boy did he. In every situation that I can remember after that, he would cut an adult off mid-chuckle to tell them how we (my brother and I) were actually really good help and he would expound into something that we had been doing on the farm lately. That singular act, as silly as it sounds now, made me feel so supported. It let me know that he had my back and that he would defend me. I had no credibility as a child, but he was willing to lend me some of his credibility until I was able to earn some of my own.
I want to do for my kids what my dad did for me, and I pray often that I do it as well as he did. I think the key is noticing that there are two parts to this equation. First you have to let the kids have some responsibility. Allowing them to do meaningful things also means that there is an opportunity for failure, but that's ok. They learn to pick themselves up and go again. Eventually, they will have success, and usually, they surprise me with their capability. After these successes, heartfelt praise and affirmations will etch into them the feeling of support, and of a job well done. Thanks Dad. 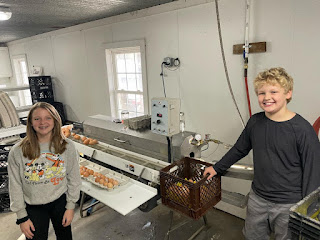 Posted by Carlton Farms at 6:01 AM